The ads above are Google-sponsored.
Clicking on them at every visit helps support this website!
Clicking on something inside an advertisement helps even more!
Interested in history of this site and how I run it?   Donating

If you have INsufficient adjustability to set valve clearance after milling the head, see article 60 section 5:
https://bmwmotorcycletech.info/valves.htm

This is a rare occurrence, and usually only happens under racing conditions, such as with very high rpm, and/or high lift cams, increased valve spring strength, insufficient spring clearance at maximum lift, etc.   However, it did happen, but rarely, on stock early Airheads, in non-racing use, and only in the /7 era, as far as I know.   If you look closely at a rocker arm, immediately next to where the ADJUSTOR screws into the rocker arm, the web width there on the suspect rocker arms is about 7 mm wide.  BMW made a production change and the rockers with the factory change had a 11 mm width.  There was no change in the rocker part number.  It does not appear to be a formal re-call by the Factory.  I am not listing all the rocker part numbers, except two, because:
1.  No new rockers are available that are 7 mm.
2.  It is easy to confuse yourself over the SEVERAL part numbers used for the rockers. The original part numbers, long gone now, were 11-33-1-262-403 and -404.
3.  You can measure your rockers.

This section does not apply to the /5 series, which used bushings in the rocker arms, not needle bearings.  I discuss the /5 series separately in this article.

In working with the valve gear, and not doing a bearing replacement, I recommend you do not disassemble the rocker arm shaft area unnecessarily ...as if pulled far enough out, some tiny roller needles may fall inside ...or on the floor. The needles are located at each end, arranged as a bearing.

The proper amount of needles at either end is just enough so one more will not quite fit.  I will get deeper into that later here, because there are two types, meaning two numbers of needles, and some other things to explain. The center area is empty.

Rocker shafts will have either a small round aluminum insert (sort of gray in color) ...used up to sometime in 1982; or, an offset from center punch prick on some 1982 ...and all later ones. Both markings must face up. The punch prick mark must also be outwards ...that is, towards the valve cover ...except that later shafts are angular drilled, and can be 180° reversed, when needed, to lengthen life.  Best to follow my instructions, and have the markings as above, that way you do not have to worry about whether your shafts are angularly drilled.  If you are anal enough, take a look at your rocker shaft(s) and notice the oil passageway drilling ...since the oil comes from the long two top studs that hold the cylinder to the engine case, ...guess which way the drilling must be in order for oil to flow!

Some late 1970's into at least late 1980's (and possibly later) needle bearings were faultily made at the cage rolled crimp, and an end can fracture and then needles will be found in the valve cover(s).  See AIRMAIL of September 2004.  It is possible that some faulty needle bearings were installed even later. The cage is a metal sleeve that is rolled-over and inwards at the ends, forming a captive area for the needles. The rolling wasn't enough, and the cage was riding on the shaft, breaking at the rolled end.   Rollers came out ...note what the rocker block looks like.  There is a split, a gap, & needles can SPIT OUT that rocker block GAP.  Needles are typically found in the valve cover, or in the oil pan.

New bearings are the fix, and you can check them with a rocker shaft to see that the shaft and bearing rolled ends no longer touch.  The bearings (you need EIGHT to do all the rockers) are 11-33-1-261-712. They fit all the rockers from the /6 onwards including the 1985+ rockers that are narrower.

Press them in so they are a small amount below being flush. DO NOT damage them.

They've been made with 30 (early) and 31 (now) needle rollers, both are fine ...the 31 needles version has very slightly smaller diameter rollers.

Deburr or relieve faintly, the ends of the rockers so the new bearings install nicely. I think that in a discussion on these a long time ago, Tom Cutter recommended on the LIST that the more rounded end be inserted first.   My  recommendation has been that if your brand-new rocker needle bearings have a flat end and a rolled end, the flat end is UP.

You can remove the needles & install them later...at which time use most any thin grease, even Vaseline (Petroleum Jelly) to help ensure they don't fall out of place. Use of a shaped tool to install the bearing shell is best, & done in an arbor press or in a vice with soft jaws, etc.  I've not tried the axle as an installing drift, as some have mentioned, perhaps the lip on the axle does not have enough surface to do a proper job?  Do not have the bearing proud of the rocker arm end surface.  I set them a wee bit below that surface.

I have not tried this, but see no reason it would not work:  Install the bearings using a large bolt and thick large flat washer.  Once flush, install a wee bit below flush, using a small washer of nearly the same OD as the bearing.   Be careful, do things carefully and squarely.

Inspect the rocker shaft for damage.

There is an update kit (~$373 in 2018), to convert the rockers assemblies on the 1976 and later bikes (through 1984) to the 1985+ style that use shims.  Some items in the kit fit even earlier.    KIT Part number is 11-33-9-057-699.  You will also need support bushings 11-12-1-261-405 if you use the new style rocker arm assemblies.   You could use junked heads from 1985+ to provide the parts, or swap the heads if in good condition, or rebuildable, etc.   The mentioned kit includes the fin quieting pads: https://bmwmotorcycletech.info/quietingpads.htm.  The pads are available separately, as are any of the kit parts.   Don't try this kit with the early /5 heads, it won't work.   Many folks upgrade the earlier bikes to later items in a piecemeal fashion ....such as using the later pushrods.    The 1985+ models, and fully kitted 76-84 models, adjust their end clearances by means of shims. These rocker units have a pressed-in plastic part that helps quiets noises.

The 1985+ rocker gear uses a shortened (narrower) rocker arm.  I think the early eighties rocker gear is slightly better, depending on your point of view; and no shimming is needed on 1984 and earlier.

When entering BMW part numbers in on-line dealer fiche, delete the hyphens, use no spaces either; that way any on-line fiche will accept the number.

Here is a sketch by itself on the head quieting pads; and with a slight bit more information: https://bmwmotorcycletech.info/quietingpads.htm

First, as noted above, the 1985+ rockers, kit, etc., won't fit right out of the box ...although they can be made to work.  There are TWO types of these /5 heads.   If yours has steel tubes pressed through the fins, next to the spark plug (both sides), these tubes go into the cover area, the rockers are on them.  You will need the round spacers that fit the tubes & push against the O-rings, pushing them into the head.  Otherwise you will have oil leaks. Use the 1974-1975 needle bearing rockers.   There is a later /5 head that the tubes did not show through, and these don't use the O-rings, nor spacers.  For these you can use the later rockers and parts up to 1984.   The later ones had better heat treated tips.      See the photos and notes on the /5 here:  http://largiader.com/tech/rockers. That page may help your understanding somewhat & has some general information that applies to all models of the rockers, all years.  That page does not give nearly enough information.  All the information you need is in the article you are reading, above and below here.

This head does not need O-rings because the casting surrounds the tube. 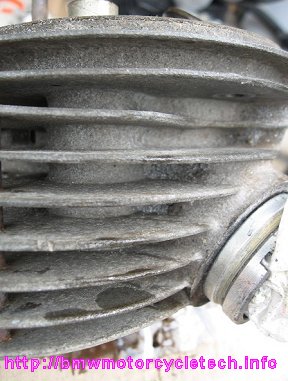 The below head uses O-rings as the large tube appears with no surrounding casting.  Don't look at the thinner and rusting one here, I do not mean that small tube. 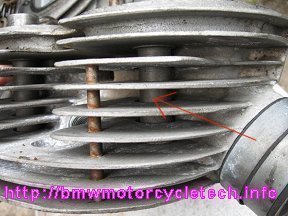 /5 models with original valve gear need extra care to align the rockers/shafts/blocks assemblies.  There is no locating step machined into the rocker blocks.   These parts can all be moved about a fair amount if the rocker hold-down nuts (head nuts) are loosened.   Clymer's, Haynes, and even BMW's literature, shows an alignment tool that can be machined-up, but this tool does not do what is promoted or described.  Alignment of the /5 rocker gear is done every now and then during valve adjustment time ....by squeezing together the rocker blocks lightly, while also keeping the blocks square to the rocker ends ...and then positioning the pushrods in the bores, and ....keeping an eye on the rocker tips where they contact the valve stem (offset is proper, for valve rotation).   The /5 rockers have a pressed-in bushing, and the bushings wear, as do the shafts (but much less so for them).  Here is how to quiet those worn /5 rockers:

Below are some recommendations:

I have other recommended service places, and there are not many, in: https://bmwmotorcycletech.info/references.htm

I have been told that Seibenrock makes a pushrod tube mandrel ...some sort of mandrel is a must when installing new tubes; I've used one I made, and before that, an axle.   See my above article for lots more information!