The ads above are Google-sponsored.
Clicking on them at every visit helps support this website!
Clicking on something inside an advertisement helps even more!!
Thanks, also, for the donations!   The donating page extensively
explains how this website originated and is run.

WHY is this on Snowbum's website?
Snowbum is hosting this information.

Do/did other companies make leaners?
YES.  I will list only one here, for now.  An interesting small company that makes interesting leaners:  http://www.kalich.de/index.html
I suggest you take a nice long look at all the pages, the video, ETC.


The Flexit:
The Flexit technical information, brochure, & photos in the following article, were furnished courtesy of John Goff.  John Goff has positioned himself, & rightly so,  as "THE HISTORIAN" on the Flexit.   John appreciates passing on Flexit information ...& would love to chat with Flexit owners, or those interested in Flexit's.   John also invites those of you with additional Flexit information, knowledge of ownership, etc.,  to contact him.   E-mail him at:  jg@teleport.com 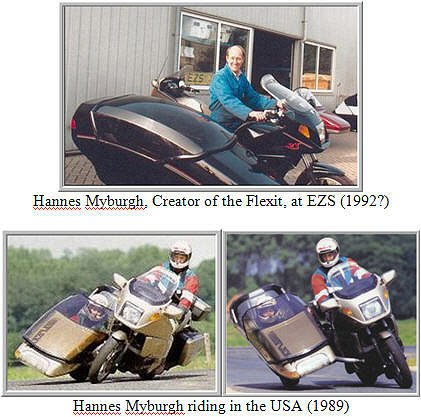 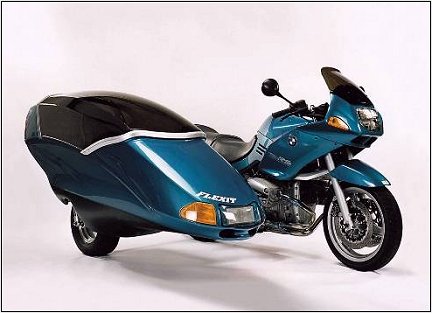 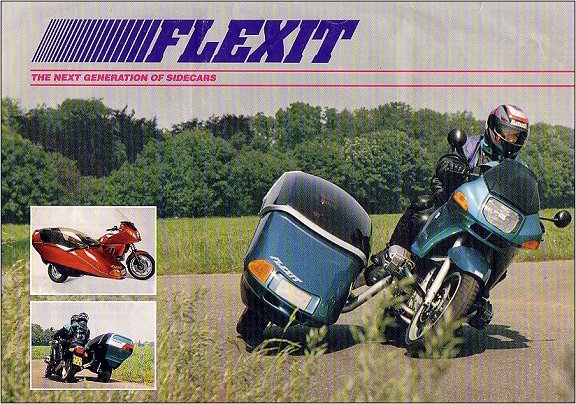 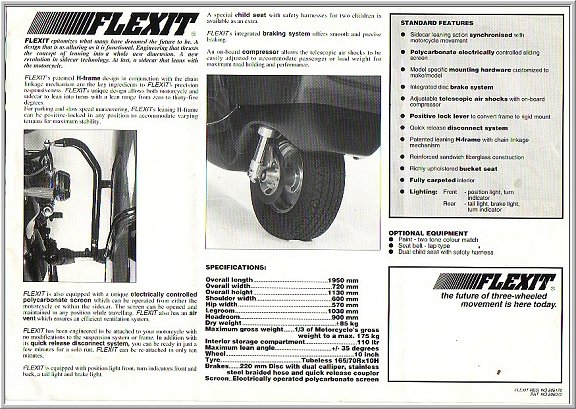 In the below 8 photos, the red Flexit and red Moto-Guzzi
rider is Steve Kealy, near Melbourne, Australia, with
daughter, Bronwyn.  On the red Honda ST1100 is Frank
Sumner of UK.  The blue Honda GL1500 is also from the UK. 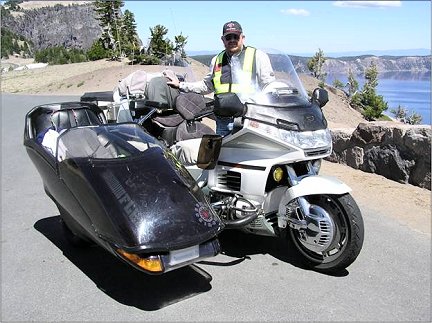 note:  this article by John was edited slightly by Snowbum.

"The Flexit fully articulated sidecar is considered by many to be the best engineering solution to the engineering problem of making a sidecar that leans in unison with the towing motorcycle.    The Flexit is one of the very few leaning sidecar designs ever built that features a truly convenient & reliable lock-out device for parking maneuvers.

In the opinion of many I have talked with, this design is the best functioning articulated sidecar yet done, the best engineering solution yet done for a unison or parallel leaner.

The Flexit was the brain child of Hannes Myburgh, an accomplished South African engineer & designer. His creation of the Flexit was a personal "hands-on" effort of dedication & devotion to his concept.

So, how well does a Flexit sidecar work really? Well, there is an anecdote about Myburgh taking one of his Flexits to England to the Triumph high performance test track & hitching it up to one of Triumph's test mules.  This motorcycle was equipped with radio telemetry to record all aspects of the test run. Hannes (pronounced "han-ness") plus his Flexit sidecar were looping around their test track reaching speeds of 260 kph (161 mph) in 6th gear in straights, which impressed the Triumph engineers. When Hannes got back to the pits, one engineer quipped that the gear ratios for 6th gear are an overdrive. If he would have left it 5th gear, the bike would have gone "faster". Most riders would say that 161 mph is "FAST" on a motorcycle withOUT a sidecar. I have never heard of a street legal sidecar with this kind of performance, let alone a unison leaning sidecar, that allows the motorcycle to still be a motorcycle in the curves.

The intriguing story of the Flexit is a traveling story that migrates from South Africa to Europe, to California, & finally back to Europe. It is hard to know accurately the total number of Flexit units produced from 1981(?) to 2005. My sources suggest that 29 units, including the original prototype, were made in South Africa before Hannes Myburgh moved himself and Flexit manufacture to California Sidecars in Southern California in late 1988.   I have the photos and original owner information on #29.    Between 29 & 51 units were possibly made by California Sidecar (CS) in California – 1989 to 1990.  I believe the production numbers at California Sidecar are more likely to be ~30, and even this number may be optimistic, as it has been reported that CS production included some that were exported, and perhaps 3 were left-side attach models.

It is known that 92 units were made by EZS in Holland (The Netherlands) – 1991 to 1999; reported to me by Albert Engbers, founder of EZS.  The highest single year of production at EZS was 11 units.

I have a breakdown by destination country of where these 92 went.  Perhaps four or five of the 4th generation Single Sided Swingarm (SSS) Flexits were independently produced after Hannes Myburgh left EZS in 1999;  from 2000 to 2005 before all production ended.  From 2000 through 2005 perhaps five of the 4th and final generation single-sided swingarm variants were produced by Hannes Myburgh at his home in Selham, Holland.  The last unit made was sold and went to a buyer in Barcelona, Spain in late 2004, and I still have on-going communication with him, and he still owns it.   I also have reports that Hannes had designed but not built an adult 2 passenger, tandem seating, evolutionary model. Details are skimpy.

That's a total of 167+- Flexits world wide, including both left and right side attachments, of which about 15% were left side attach models. And of all of those, perhaps 70 reside in North America.

Production of the Flexit sidecar happened in 4 phases. In South Africa, Hannes Myburgh independently produced his original rough prototype as proof of concept of his design & then finalized the finished, fully functional design, including the unique electric canopy windshield cockpit enclosure system, & integrated disc brake. And though the numbers were few, perhaps 20 units, it was the beginning of a 3 continent, 20+ year journey.

With a fully developed articulated sidecar design, Hannes' next step was to take an example to a big international motorcycle show in Europe (1987?).  When Peter Smith saw his first example of a Flexit at that show, he became both a fan & an advocate. Peter was instrumental in assembling a team of 3 men: Hannes Myburgh, Albert Engbers (of EZS), & Peter Smith, & fostered the idea of bringing the Flexit from Europe to the USA for its first serial production.  A key stepping-stone in this was the signing of a contract with California Sidecar (CS) for first mass production run of Flexits in 1989 and 1990+.    29 to perhaps 50 units were produced in this first commercial run of Flexits at CS.

Peter Smith stayed in California & started the Champion Sidecar Company (a traditional rigid sidecar maker that is still in business today).  Engbers & Myburgh returned to The Netherlands, & in 1991 restarted Flexit manufacture at EZS, which continued through 1999.  According Albert Engbers at EZS, 92 units were produced (including both Left and Right attach versions).  According to one British source, of these 92 there are 12 left side attach Flexits that were sold in England, all sold through & distributed by the Watsonian Sidecar Company.  These were actually badged as Watsonian "Squires". The exact numbers of "other" left side attach versions of the Flexit outside of the original South African made units is not known to me.

In 1999, Albert Engbers ended Flexit production at EZS.  But Hannes Myburgh continued trying to keep both unit production & design development of the Flexit going forward. After leaving EZS, Myburgh then begins independent production of Flexits in 2000. The last Flexit is thought to have been produced in 2005. I do not know the numbers that Hannes produced between 2000 & 2005, but it was apparently a very small operation, with perhaps 4 or 5 units (that I can document with photos) being made.

The former Flexit sidecar web site was shut down & sold in 2005.  Albert & Hannes remain good friends, though due to his health, contact between them is sporadic. Hannes Myburgh still resides in Zelhem, the Netherlands (Holland), which is also the home of Albert Engbers and EZS sidecars.

Hannes Myburgh really was the driving force behind the creation & production of the Flexit, especially in the last ditch effort at the end.  Once again Hannes was personally involved in the fiberglass work. With long-term recurrent exposure to Keotone (spelling?) (a solvent) & other fiberglass related chemicals he suffered internal organ & even, it is rumored, neurological damage. It is said that Hannes Myburgh receives a disability income from the government of The Netherlands. I am told that Hannes has good days & bad days, & that he is getting better. I hope so. We all certainly wish him the very best.

For the surviving Flexit owners, one of our biggest long-term worries is the unique polycarbonate Flexit windshield. Thankfully these are amazingly durable; short of some sort of calamity, the need for windshield replacements is infrequent. Albert Engbers says that Hannes Myburgh still has (owns) the machine that he designed & built that made (blew) those windshields. But in as much as Flexit production has ended, so has the Flexit windshield availability. (I know, because I tried to buy one at EZS when I was there in January, 2007).

I once had an email from Dave Szkudlarek, the moderator for the Yahoo groups on-line Flexit Sidecar Club, with Dave expressing the view that he thought that around 200 Flexits had been produced. Some believe that as many as 400 may have been produced. So far, my research into this question shows 20? + 50? + 92 + 5? = 167 units (plus or minus a little bit) & suggests that an estimate of 200 might be a little high.

Here are some photos of Mike Huntzinger's R1100GS-Flexit rig.  These were taken at the 2009 USCA Sidecar Rally at Lake Tahoe.  That Rally was produced by Snowbum & wife Penny, who live at Lake Tahoe, & at that time owned a sidecar rig, a K1100LT with EZS wheels, etc., with an EML-GT2 (one hinge version).  You are probably reading this Flexit article on Snowbum's website:  https://bmwmotorcycletech.info 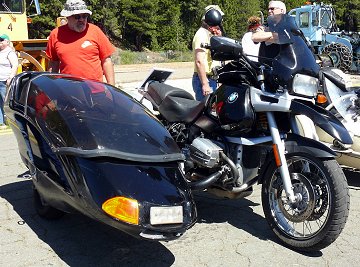 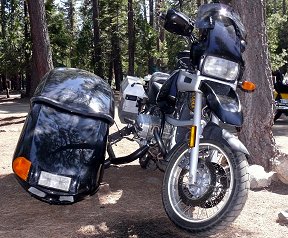 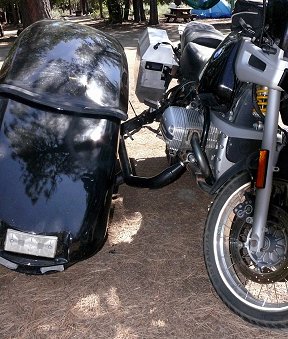 For a not-so-great-photo, and the patent information, etc., for the FLEXCAR, attached to a very old Indian motorcycle:
https://bmwmotorcycletech.info/photogallery2.htm