WHO WAS OAK?   ....Snowbum reminisces 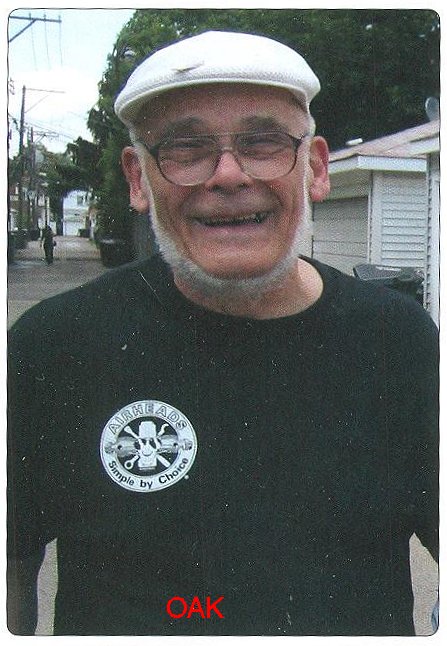 Obediah Orlando Okleshen, aka just "Oak", was a friend of mine for decades.

Oak and I would have long telephone conversations, discussing not just BMW Airheads, but things electronic; and, well, almost anything, including politics.  We discussed a lot of things, including The Human Condition, whatever that may mean to you.  We had long typed letters back and forth; beginning long before we began to 'enjoy' E-mail and the Internet.  Once we had a series of conversations, and typed (real typewriters) letters and sketches flying back and forth between us, on some VERY esoteric effects and methods of tuning pianos for proper timbre, etc.  You could look up the Railsback Effect, if curious: https://en.wikipedia.org/wiki/Piano_acoustics

Oak knew metals and industrial repairs, he worked as the VP & Plant Manager for Bonell, a rolling mill manufacturer. Oak also had an electronics background.

I was quite honored when, decades after we met, Oak asked me to join him in an Airhead Repairs business, this perhaps about half a dozen years before his death ....it's a long story. There would have been some special advantages for me, including being nearer our #2 son and his family who live near Indianapolis. It would have been a major change in lifestyle for me.  I turned Oak down on his offer, after a lot of thinking and looking into a mirror.   Oak never went ahead with the plans....I still speculate now and then about why.

Oak was member #5539 of BMWMOA, and #35 in the Airheads Beemer Club. Oak was interested in many things; perhaps better said, he had a deep curiosity about most everything.  He had gotten deeply into photography.  He was a Ham Radio operator, first as W9EXE, and later as W9RX, and had owned 'a few' Airheads, including a R60/5; R75/5, and his famous 1979 R100T, which was called Mountain Goat II.   Oak designed a 'It will last forever' stainless steel rear drive coupling for his Airhead  (no splines to wear out).  That design, made and installed, was WAY over the top, a total over-kill.  I seem to know someone who was something like Oak...and does things like that, visiting him now and then, in my mirror.  Oak and I discussed modifying the design and offering it, and decided not to.   Oak had quite a number of special custom built tools for working on Airheads (AFAIK, he sold them in 2016).  I may get into discussing some of these things, in the future.

Oak had gotten heavily into electronics, so we had a lot of conversations on that general topic.  Oak was actually repairing electrical things around his house as a child, & was repairing radios, for a profit, when in Grammar school (Elementary school).   He worked in the electronic organ industry, serviced TV's, went into the Army ...Signal Corps ...and was an honors graduate at school in Germany.   He was with IIT Research Institute for some years, and received his BSEE then, and worked as a research engineer in electronics & physics.  He was at the 1962 A-bomb high altitude tests ....and 6 months at the Tonga Islands site.  He was involved in magnetic tape systems development.    He did a lot of TV repair & HiFi work in the Richton Park area (Chicago area).

Many of the things Oak did in life, I was also involved in, also at a very early age.  Kindred spirits, well, sort-of.  I was the more wild one though, ....I guess, ...not sure.

Oak was a good friend & a mentor.  He was the type of friend who relished a good technical argument, and we had a few classic ones over the years. HOWEVER ...the discussions we had over my supercharged R75/5 are not for tender ears nor polite company.    We also had a few adventures together, few I ever wrote about; some are best not written about  ...but....see about half-way down this linked article:   https://bmwmotorcycletech.info/throttlescrews,etc.htm

Oak, Carol (Oak's wife), and I, had been to a number rallies over the years, camping together, working together, etc. ....although I could not get him onto the track with me at Laguna Seca when we camped in the infield there at the MOA rally in 1986.

At the yearly MOA rallies you could expect to see Oak, Carol, and yours truly, camped someplace at or near Airhead Central, often getting greasy fixing someone's Airhead, & usually doing Seminars.   Other folks you might see at these Rallies helping in every which way include Matt & Susana Parkhouse and Tom Cutter doing Seminars, especially when events were in the East.

Oak wrote articles (he was the Technical Editor for many years) published in BMW News (BMW Motorcycle Owners of America, BMW-MOA, etc.). He also wrote for 'the other' BMW riders' group, which published On The Level (OTL).

I suspect TENS OF THOUSANDS of folks got advice from Oak, from letters, and later by sending an Email to  askoak@aol.com.  Oak spent countless hours over many many years, helping Airhead owners.   BTW ...few know of Oak's ownership/riding of a K100 (I will leave some stories for later).

Oak pushed me considerably into joining the Airheads Club (Airheads Beemer Club, ABC).  I did.  I am number 1843, so I took my time about joining.  Oak wrote articles entitled AIRTECH for the monthly magazine of that Club, AIRMAIL, which most of you are familiar with.  His articles are still being published in AIRTECH, as there is a vast supply, even of never-published ones.

Long ago, Oak did not even have a computer, and I pushed him to get one.  I recommended something reasonable that would do all he needed, yet be good for the future.  Oak's response was to go overboard on the purchase ....and THEN try to learn how to use ....and maintain it.   That led to telephone conversations ....on using Microsoft and other products ....and a lot of other computer Tech.   Having a computer, soon Oak was posting on the Airheads LIST.  Then, ....thank's OAK! ....it was not just mostly me doing the tech posting.   The LIST membership, for awhile, had contests on who posted the most lines every month.  Mr. Verbosity (me) won most months.  In the very early days, we all longed for high speed internet ....but we were on DIALUP! (seems like a lifetime ago ...well, nearly is, in computer/internet improvement time ...).  Eventually, Oak tired of being asked by two folks to constantly prove his knowledge, etc., and he quit the LIST.

Oak was, to say the least, highly qualified and knowledgeable about your Airheads.  After BMW school training, he went vastly further than just about anyone.  Many an Airhead owner, member of ABC, has a vast collection of Airmail issues; ...and perhaps one of Oak's indexes of his articles, still available from his widow, Carol.

Oak was a member of the Chicago area club, and had a LOT of input into the various manuals published by the club (CHITECH). Oak essentially wrote the Electrics Manual on Airheads.   It was, and remains, the BEST such available.  It is called the Chitech BMW Electric School Manual.  I think the first edition was in 1976.  It is still available from Chitech.   I wrote a critique, resulting in  corrections to that manual (doubt ever incorporated though), and that critique, and how to purchase the manual, is here:  https://bmwmotorcycletech.info/chitechelmnl.htm

Oak was made an official Friend of the Marque by BMW, a very prestigious award.  In MY opinion, there have been a few who received that honor who probably did not deserve it, but Oak certainly did.

Oak will live on, certainly in my memories.
I, like Oak, try to pass on whatever knowledge I have obtained.
Some of that knowledge came from Oak.

Your friend,
Bob (AKA Snowbum)