The ads above are Google-sponsored.
Clicking on them at every visit helps support this website!
Clicking on something INSIDE an advertisement helps even more!
Interested in the history of this website?  How it is run?  Donating?
CLICK!

Well below is a photo of a properly lightened flywheel.  Lightened Airhead flywheels are sometimes installed on early heavy flywheel models (pre-1981).   Although this article is specific to the /5 & later, the basics apply to BMW's before the /5 models.

From 1980/81, BMW changed to a totally different type of 'flywheel', which was renamed as the Clutch Carrier & the clutch parts were totally different, & the transmission input shaft spline was shortened to match.  The entire assembly was considerably lighter.  This accounted for some of the lack of smoothness of the later models, as the engine had less stabilizing/smoothing mass at the crankshaft output.  This was particularly noticeable at idle rpm, but also noticeable for more buzzy-ness (higher frequency vibrations) at higher rpm, while actually riding.  These later models with the lighter clutch assemblies generally enabled slightly quicker down-shifting, as the rpm drop was faster when the throttle was chopped, not to mention the more sudden effect on the rear wheel upon a throttle chop.  The faster shifting is generally regarded as a nicety.  Shifting to a higher numerical gear number can also be nicer.  There were changes inside the transmission that also made additional shifting nicer.  There have been rare instances of folks lightening the flywheels (Clutch Carriers) on the 1980/1981 and later models, which must be done quite carefully, as the entire clutch and flywheel (clutch carrier) are different from earlier and already lighter.

Lightening the flywheels on pre-1980/1981 era Airheads will enhance shifting, by enabling faster shifting, because the flywheel has inertia, & with less weight, less inertia, the flywheel ...with engine crank, etc., attached, will slow down at a faster rate during shifting.   You will have smoother shifting if you shift faster, before the rpm changes too much.  The acceleration will be somewhat faster, as less mass is being speeded up or slowed down.   Engine braking is reduced with a lightened flywheel which can help handling during braking. When shifting upwards, and using the clutch (rather than just the throttle chop technique with pre-shift lever loading), the shifting can also be quicker.

There are downsides to lightening a flywheel, besides cost.   Engine vibration will increase, but not excessively.  In my opinion most is easily fixed by careful carburetor synchronization, particularly at idle rpm. Some of the smoothness, ...some of this is almost intangible ...will be lost, but, not excessively. Depending on the year & the transmission & if it has the so-called shift kit (5 speed transmissions), shifting can be more or even less positive in actually finding the gear position & neutral position in particular (mostly 5 speed transmissions).   You may need to shift just a bit faster, & perhaps spend a bit more effort on matching rpm when shifting.  However this is offset by generally considerably less clunky shifting.   While I have mentioned these things, the truth is that you will get used to it without hardly thinking about it, and the clunky shifting will lessen considerably.   Because the inertia effects of the lightened flywheel is lessened, you may find that the engine will be slightly more prone to stalling on take-offs ...especially if not fully warmed-up.  This is combined with the need to slip the clutch slightly more when starting out ...this is the reason I do not recommend lightened flywheels on sidecar rigs; although the effect is not all that much, particularly on lighter sidecar rigs.  On early bikes there may be over-shifting.  It is my belief that a lightened flywheel will promote slightly faster wear on the transmission input shafts.  I can, however, argue both ways on that subject.

The "shift kit" that BMW installed during the 5 speed improvement days is most effective on the 1981/1982  models (to maybe 1983, depends on exactly when BMW phased in the shift kit themselves and its other changes on the various models), because these eighties (and later) models have the lightened Flywheel, called a Clutch Carrier.   The shift kit might improve earlier transmissions slightly, certainly the pawl spring breakage problem is lessened.  The shift kit will help if the early heavy flywheel has been lightened.   The shift kit did NOT come with any instructions.

I personally might not put the shift kit into a stock early heavy clutch/flywheel motorcycle. There is no problem learning how to do the nice slightly slower shifting with the old setup.  Pre-pressuring works delightfully.   YOU might want the kit, however!  It is available as parts, not 'kits' now.   The shift kit DOES give MUCH better neutral-finding. Over-all, I would say that the shift kit is a worthwhile change.

A cafe'd or hotted-up bike with a 5 speed should have a shift kit and lightened flywheel.

The thickness (called viscosity) of the transmission oil has a substantial effect, depending on temperature, as to the shifting characteristics. The oil ...and quite a few other factors in the gearbox design, have an effect on how the gearbox parts slow down or speed up, as you attempt to shift.

Shifting speed is not just something involved with the 'shift kit', it is also involved with gearbox internal setup, and some of the many changes made in the gearbox over the years by BMW for various reasons.  If you are installing a lightened flywheel, consider the kit.  A complete description and details are in https://bmwmotorcycletech.info/transmission.htm

For any engineer-types reading this, NO, I have never heard of crankshafts cracking/breaking from lightening the old flywheels.   To explain that:  flywheels often act as dampeners for crankshaft torsion vibration modes.

The old BMW's are never going to shift like a K bike, nor Japanese crotch rocket, no matter what you do to the clutch or transmission.  The Airheads use rugged dogs (ends of the gears have square pegs) for shifting/engagement.  You can improve shifting by fine-tuning the transmission innards ...but, just how far do you want to go?  Are you really taking this bike onto a racetrack ...or do you like its smooth (if a bit clunky) gentlemanly manners when out for a ride?  Have you mastered the standard BMW Airhead bikes shifting technique of preloading the lever?  IT REALLY DOES WORK!

PRE-Airheads flywheels are scarce, so if you lighten one, do it with the idea you will accept what happens.

The photo below is of a properly lightened Airhead flywheel (IMO).  This photo was furnished to me by Beemershop at my request, as I did not have any photos from when I lightened flywheels.  Ted Porter's Beemershop is an independent BMW motorcycle repair center, located in Scotts Valley, California  (831) 438-1100.  www.beemershop.com    They have the ability to supply these flywheels, or machine yours, by numerically controlled precise machining methods.   Flywheel lightening MUST be done properly.  There is NO NEED, & I recommend AGAINST, machining off the flywheel outer edge marks (S, OT, F).  NOTE CAREFULLY the needed outer metal that was left to support the starter ring, threaded clutch attaching boss places, etc. Sorry, but I do not have an edge view photo for you.

When installing any Airhead flywheel, have the pistons at TDC, with OT showing in the timing window, otherwise you might install the flywheel in the wrong position onto the crankshaft.  Do NOT tighten the 5 flywheel bolts right away, but have them SLIGHTLY loose, and CENTER the flywheel on the bolt shoulders, by trying to move the flywheel circularly clockwise and counterclockwise, ...sometimes there will be a slight amount of play to center-on.  Progressively, criss-crossedly, tighten the bolts in stages.   Refer to other pages for the tightening torques, which vary considerably between years and models.   Be careful not to over-torque the /5 and earliest /6 bolts, which are 10 mm diameter, not the later 11 mm diameter.

The last of the Airhead models, per BMW, used oiled threads, and a very high torque.  I prefer a somewhat lower torque and no oil, or, just residual super-faint oil from cleaning, although I have actually heard of no reported problems with the high torque settings.  There are two other articles on the flywheel, one being a WARNING article, on this website. READ THEM before doing ANY work (INCLUDING LOOSENING) with the flywheel, but, especially read this one: https://bmwmotorcycletech.info/flywheelremovalwarning.htm  .....>>VERY IMPORTANT<<

Main article that has all the information on the flywheel torque values, and associated information: https://bmwmotorcycletech.info/clutch.htm.  It is Article 60, subsection 9, but you can click that hyperlink.

When working on Airheads, you may occasionally need to know about spacing between markings on the flywheel (or clutch carrier).  You may need to know the distance per degree on the circumference.  The diameter of the larger engine flywheels are all the same, and there is 2 mm between each degree.  For the R45/R65, it is 1.5 mm between each degree.

Do NOT machine off the timing marks.  Keep the flywheel symmetrical! 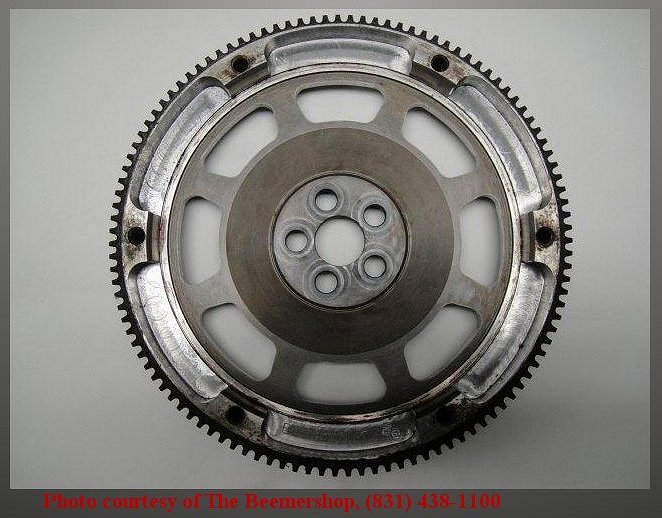