This site has Google sponsored advertisements on almost every page.
Clicking on them helps support this website!
Clicking on something inside an advertisement helps even more!
Thanks for clicking and looking at them!

New to me, 1995 R100RT, arrived 05/20/1015.
I changed the windshield to a much shorter one; and, to
a somewhat different seat style...lower, with much more
lumbar support, etc. I loved this motorcycle, but it is
gone now, & I gave the new owner the taller
windshield, and a lot more. 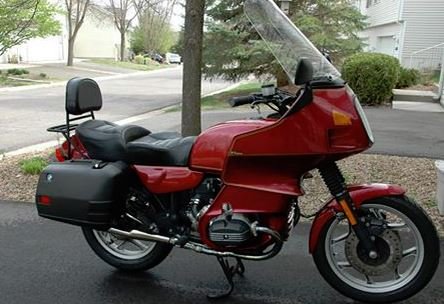 Old Krauser bags, with bungee attaching points,
not on the above bike, just one of my old bikes. 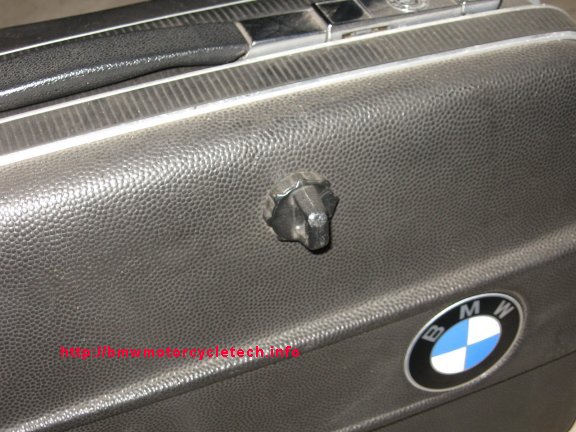 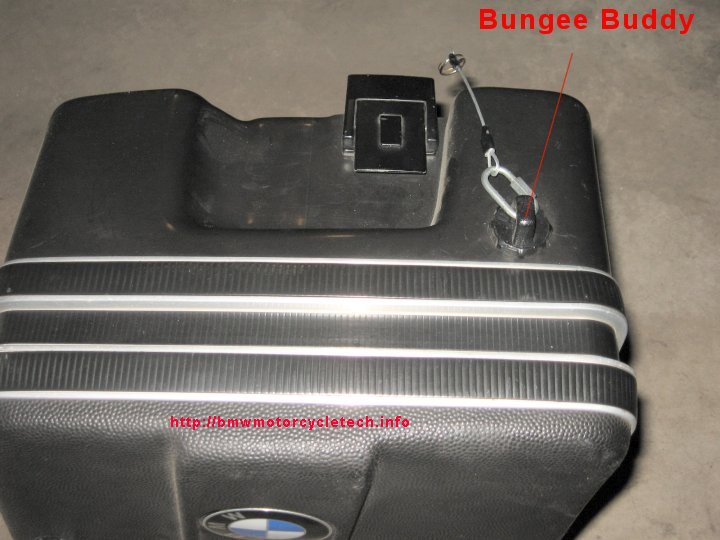 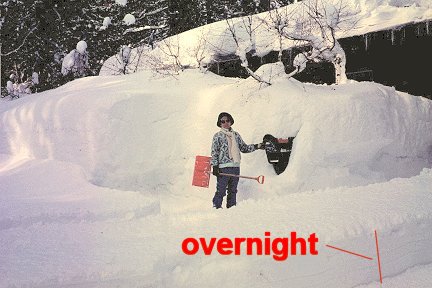 note to myself:  do not delete this below photo, it is used in the tirerepair.htm article. 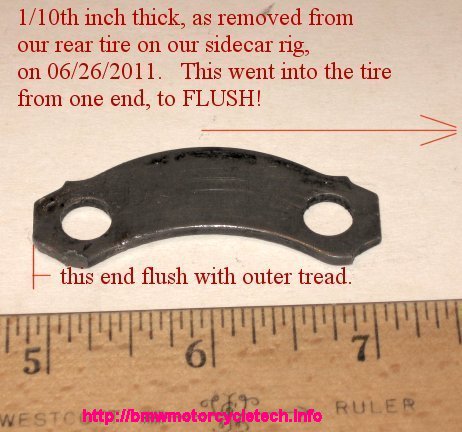 When this nasty bit of metal went into the tire, it did not go straight in, but went in on an angle before it straightened out. Thus, the somewhat rectangular and truly nasty hole in the tire it made.  Was the devil to get the tire to hold enough air so we could get home.  We were maybe 70 miles away, and in the mountains.   Towing services asked for $400-$800.  NO WAY!  I managed to fix the tire enough with sticky tire repair inserts (strings) and two mushroom inserts. I carry a tiny electric pump which did fine....and it had to be used to inflate the tire 3 times from flat, and topped off once, and this is not a small motorcycle tire, but a small car tire on my sidecar rig rear wheel.  Of course I replaced the tire when home. 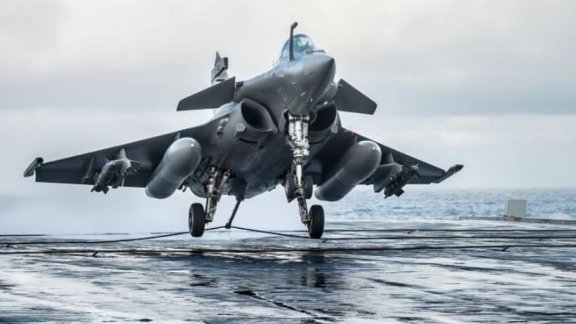 The Vietnamese found uses for all those discarded fuel tanks.
I eventually got my hands on a similar tank, and made a streamliner
for my second Bonneville Racer.   Was hard to ride/control.

Below is a photo of a cockpit I seem to remember....do YOU know what aircraft this is? 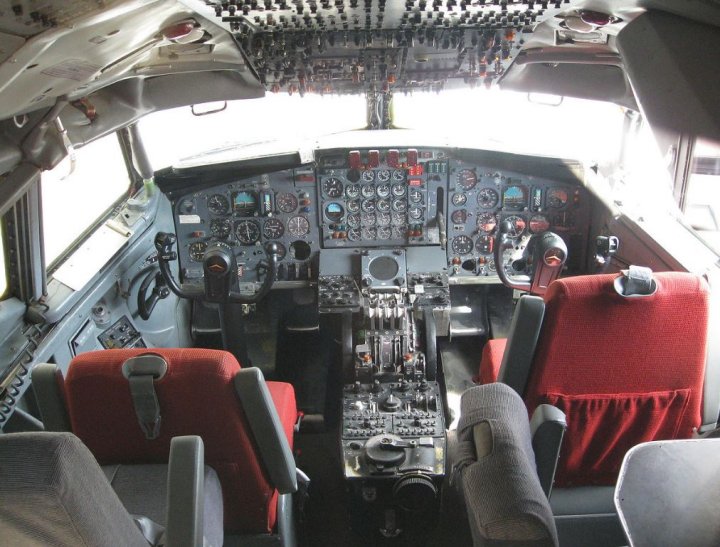 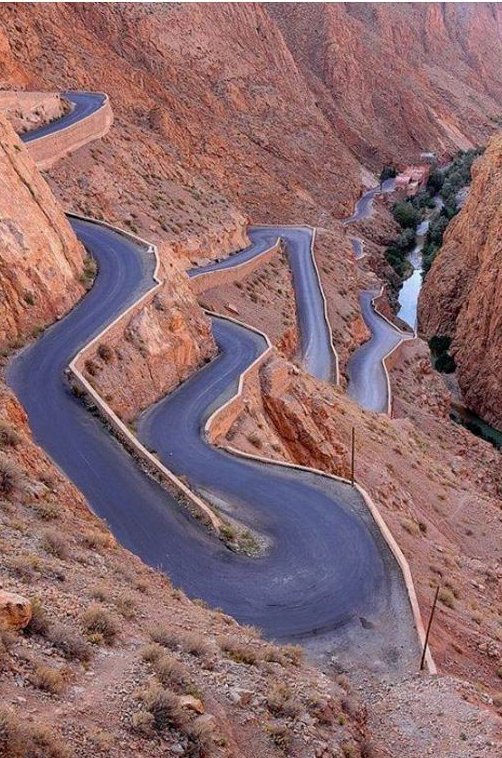 Flying Terms:
AIRSPEED - Speed of an airplane. (Deduct at least 25% when listening to a fighter pilot.)
BANK - An institution that hold the lien on most pilot's cars.
CARBURETOR ICING - A phenomenon reported to the FAA by pilots immediately after they run out of gas.
CONE OF CONFUSION - An area about the size of New Jersey located near the final approach fix at an airport.
DEAD RECKONING - You reckon correctly, or you are.
DESTINATION - Geographical location 15 minutes beyond the pilot's bladder saturation point.
ENGINE FAILURE - A condition that always results when all fuel tanks mysteriously become filled with low-octane air.
FIREWALL - Section of the aircraft specifically designed to funnel heat and smoke into the cockpit.
FLIGHT FOLLOWING - 1. Formation flying 2. Bird watching.
GLIDE DISTANCE - Half the distance from an airplane to the nearest emergency landing field.
HOBBS METER - An instrument requiring an immediate emergency landing if should it fail during dual instruction.
HYDROPLANE - An airplane landing long and "hot" on a short and very wet runway.
LEAN MIXTURE - Nonalcoholic beer.
MINI MAG LITE - Device designed to support the AAA battery industry.
NANOSECOND - Time delay between the Low Fuel Warning light and the onset of carburetor icing (see above).
PARASITIC DRAG - A pilot who bums a ride and complains about the service.
RICH MIXTURE - What you order at another pilot's promotion party.
ROGER - Used when you have no idea about what else to say.
SECTIONAL CHART - Any chart that ends 25 nm short of your destination.
SERVICE CEILING - Altitude above which the cabin crew cannot serve drinks.
SPOILERS - 1. FAA Inspectors. 2. Box lunches
STALL - Technique used to explain to the bank why your car payment is late.
STEEP BANKS - Banks that charge pilots more than 10% interest.
TURN & BANK INDICATOR - An instrument largely ignored by pilots.
USEFUL LOAD - Volumetric capacity of the aircraft, disregarding weight.
WAC CHART - Directions to the Army female barracks.
YANKEE - Any pilot who has to ask New Orleans tower to "Say again".

Complaints are sometimes heard about problems finding mounting space on the handlebars for a GPS.  I had no such problems with my 1995 R100RT, nor my "1993" K1100LT.   I had very few problems mounting a large GPS (Nuvi 65LM) on either left or right side of the handlebars on either bike.

I used a standard RAM mount, with a non-RAM adaptor dual-ball, information below.

Note for the Nuvi 65LM:  Nuvi's, in general, are NOT designed for mounting on motorcycles.   They are cheap, but adequate.   They have no headphones output.  They do NOT like over 113°F case temperature ...and is so indicated in the fine print in the manual.  What that really means is that once that temperature (or thereabouts) is reached, the charging will quit.  That means that the Nuvi is then running only on its internal battery ...which will run down in about an hour and a half or so [at high screen brightness levels].  These large screen (6 inch on the model 65, but there are even larger ones) Nuvi models draw a fair amount from their built-in battery, particularly if you use high screen brightness (I use 1 or 2 steps below maximum available and nearly 100% sound volume).

I use an adapter that converts the bike 12 volts to the 5 volts (USB outlet) needed by the Nuvi (the Garmin cord for which uses a standard USB plug); it works fine.  However, Garmin also has a 12 volt cigarette lighter plug cord available, which I did not install on my K bike, but did on my Airhead (which has all sorts of electrical outlets).  There is NO DIN (German style plug, also called a Hella plug) cord available from Garmin (and, anyone else, AFAIK) to properly run the Nuvi. Converting the Garmin cigarette lighter cord to DIN is not something anyone without considerable experience should contemplate doing.

The standard Nuvi USB cord works fine with the aftermarket power adaptor.  I ran tests on various aftermarket adaptors, even for no load current drain, etc.

Garmin uses a special USB cord....one end contains an internal resistor, the value of which is selected by Garmin to trigger charging OR access to Garmin's various programs....such as updating via Garmin Express.  The information is available on the Internet, and I probably have the links someplace in my computer if anyone is curious.  Bottom line:  MOST aftermarket cords do not work on the Nuvi, even if the sellers say they will.

The Nuvi 65 (or, even the even larger Nuvi 75) can be used on the K1100LT. I used my Nuvi 65LM sometimes on my trips; don't really have to have it, but I like some goodies that help things now and then (like negotiating cities...).    On one trip, it was over 90°F all day during the trip, plus the temperature from the sun on the Nuvi's black case, and the Nuvi held up OK, as my wife sewed an old light colored piece of T-shirt sleeve for around the rear of the case, and a bit onto the face, not screen. That was enough to keep the battery cool-enough.   I wish the GPS makers would make sun reflecting cases.

I have everything set up so whether it is in my K11 sidecar rig, or my car, or on my Airhead, it works OK.

There are additional things to think about using these on a motorcycle.    The Garmin ball socket is smaller than the RAM ball, and the Garmin ball is part of the mandatory rear-fitting plastic Garmin adaptor 'thing' and its car dash mount...(male and female are all plastic).  In my opinion ALL are weak, and the stock Garmin will probably eventually go flying off your bike.  I obtained an aftermarket adaptor that has a METAL Garmin size ball to 1" RAM size ball, and I did some serious gluing of the Garmin's adapter (aftermarket ones are cheap if you want to get another) into the Garmin and strongly glued the ball-to-ball adapter into THAT.  The large ball end, 1", goes to my standard RAM mount through the usual RAM adaptor.   It seems quite sturdy, and I have had NO problems.

I had the previously described problems with the Nuvi overheating (that 113°F thing) and the Nuvi then transfers to its battery, won't accept an outside power source, and soon shuts down.  I wanted it to stay powered by my bike's battery.  Of course, I also did not want the internal lithium battery blowing up (I am SURE this was Garmin's reason for the shutdown when hot).   The Garmin was OK in the car, as it did not get as warm.

Note:   I have installed similar Nuvi's on friends bikes...and on three sidecar rigs.   I found that the air flowing between the sidecar rig and the tug makes for considerably more cooling for the Nuvi if the Nuvi is mounted on the sidecar side of the rig's handlebars.

To help cool the Nuvi, you cannot cover the case in reflective foil, as it blocks the GPS satellite signal.

You MIGHT be able to paint the case a reflective white or non-signal-blocking silver. I did not try those things.

I had an idea, and my wife made what I dreamed up. She cut off a sleeve on an old white or near white T-shirt, and adapted a piece of that sleeve to fit around the back of the Nuvi, and just barely cover the edges of the front black plastic that Garmin uses.  She did it all done in 15 minutes!   The Garmin will then run, even in sunlight, all day on my bikes. It has a very large screen, easy for me to see, and on brightest setting it is still usable in most outdoors situations.

NOTE:   It would be nice to have the GPS's audio output go to helmet speakers but there is no easy way to modify this Nuvi GPS for that, so have not even tried-to.

The Nuvi is a whole bunch cheaper than BMW's Navigator GPS, or many other bike capabile GPS units with large screens.  I don't much really "need" a GPS; & was unwilling to spend a lot of money for one.   I was also willing to modify the GPS as I have noted.

This short area is used for testing of various page coding elements. Nothing may be here, or, a mess, or, well, anything.