The ads above are Google-sponsored.
Clicking on them at every visit, and looking at them helps support this website!
Clicking on something inside an advertisement helps even more!!

BMW offers its own, and the part number is for the black ones for the Airhead GS models, is adaptable to many other models:  71-60-2-315-870.  BMW also offers others, in black, and in white, and many can be made to fit Airheads, and certainly even K bikes!

I wanted to add handguards (sometimes called brushguards).  I wanted something like the BMW plastic types I had modified and installed on my prior sidecar rig, which had an R100RT as the tug.  Hand-guards are important on a sidecar rig, as there is a big strong wedge of air coming between the sidecar and the throttle hand (assuming the sidecar is on the right side of the motorcycle).  The information in this article is how I installed hand-guards on my K1100LT, which pulls a sidecar.  The information is applicable to many other models.

Prior to modifying and installing these handguards, & with the K1100LT heated grips on HIGH, I could wear fairly light weight summer gloves on moderately cold days, instead of bulky Winter gloves.  I could probably ride down to the upper twenties (Fahrenheit); but not pleasantly; and not much colder than that. There was some considerable air flow across my right hand and glove.  I thought that things could be made better without going to messy Hippo Hands or similar.  The use of bulky winter gloves don't give very good feel to the controls, so I tried not to wear them unless absolutely necessary.   The oncoming air is squeezed by the space between the tug and the sidecar body, so that creates MUCH more air flow on the throttle hand than it would on a 2-wheeler.

I thought it would would be comfortable to have brush guards fitted all year round, even likely would be OK in the Western USA Summer heat ...after all, the major heat is from the engine towards the rear, particularly when the fan is on. When I put hand-guards on my R100RT 2-wheeler (NOT sidecar rig), I was able to comfortably ride in quite hot SouthWest Summer heat, so I never removed them.

I do not like the big floppy Hippo Hands, whether floppy soft or even when supported. Mostly my complaint with those is the added effort at placing ones hands in and out of them, and the floppiness, even when internally supported.  Granted they handle extreme cold quite  well.  I certainly rode with those Hippo's, or similar, for a long time, but I did not have heated grips back then either, and I was also younger! I dislike the other types of things I've seen to keep my hands warm ....and I don't drive the rig below zero or so anyway.

Fitting of 'one type and style fits all' aftermarket handguards is somewhat of an exercise in frustration, due to the complexity of the K bike controls. Other bikes may have similar fitment problems.

As mentioned above, sidecar rigs have a blast of air developed between the sidecar and the bars on that side, so my throttle hand really needed some extra protection against the oncoming cold wind. It was, of course, much worse than the left (clutch) side, but both sides needed upgrading for cold weather.   Certainly, if someone likes Winter gloves, those are OK withOUT handguards, and with the heated grips ON ....but I dislike the bulk & feel of Winter gloves, and don't use them unless conditions are truly nasty.

The details! (Photos are at the end of this article):

As noted above, BMW sells black brush-guards for the Airhead GS models, & they are adaptable to many other models:  71-60-2-315-870.  BMW also offers others, in black, and in white, and many can be made to fit Airheads, and certainly even K bikes! I know that some also fit Oilheads, probably others.

BMW sells a handguard kit, designed to work with the stalk type mirrors on the R1100GS. The bar controls are rather similar to those of the K1100LT which do not use stalk mirrors; so I decided to buy this kit, it was only about $31.00.

If you have a Classic K bike other than a K1100LT, your installation will vary somewhat from mine, and you may well have even less work to do.  The earlier K bikes usually can use kit 71-60-2-315-870.  I have briefly looked at other BMW bike models, and many seem to have similar or somewhat similar appearance to the hand controls, which is why I think hand-guards can be adapted from various models that they are offered for, to be installed on models they are not officially available for!

Here's what I did with the kit, which comes with instructions for the R1100GS:
I carefully drilled the mirror stalk holes on the two adapters in the kit to 1/2" in diameter.  The reason for this slight enlargement was to ensure a smooth fit for standard M8 allen head shoulder bolts. YOUR bolts may fit as is.  You would need to purchase or make up two of these bolts, and then MAYBE drill or ream the plastic adapter holes to fit to a smooth push-fit.

Of the two needed shoulder bolts, one should be 40 mm long, preferably with an area of no threads of maybe 9 or 10 mm; a full length threaded bolt is OK however, but not as nice if you are into exactly proper methods. This bolt is for the left (clutch) side. The other bolt needed is 16 or 18 mm long, for the right (throttle) side.  See later here, if you don't want to use that second bolt.  You will need two M8 standard nuts with waverly locking washers; or, just two Nyloc type locking nuts. You don't need a nut on the right side if you use the reverse threaded bolt, see next paragraph.

The RIGHT side (throttle side) mirror mount hole has a REVERSE THREAD!  Since LT bikes have the mirrors on the fairings; the mirror mount holes, left side (UNthreaded); and, right side (mentioned reverse thread) use those unused holes for part of the handguard mountings.  The handguard kit has one reverse threaded bolt, rather long too.  You COULD use this bolt, modify its length if you wish.  I elected to drill the RIGHT threaded area for a standard M8 shoulder bolt (that 16-18 mm one mentioned above).  Your choice.

Re-said differently:
Since reverse threaded nuts are not commonly available (if one wanted to use such, which is not really needed), and the kit supplied bolt is too long for what I thought would be a nice installation, I elected to drill the throttle side threaded hole, so the M8 bolt I supplied would fit.  I ended up cutting a bolt I happened to have that was too long, and smoothing it the usual way, but there is no problem with a commercial 20 mm length, or, whatever.   One COULD make use of the kit-supplied left-hand bolt, instead.

I did not use the metal spacer, nor that mentioned long M8 reverse thread bolt that came with the kit.  They are now residing in my "goodie" box.

I found NO restriction problems with turning radius... NO interference at all on my setup (EZS front forks); and I doubt there'd be any substantial problem with the stock forks, or any others. I'm pretty well satisfied.  SEE CAVEATS below.

DRAWBACKS:
1.  In Summertime, a possibility for less cooling air to the hands (but, they remove very easily).
2.  Slightly more effort to get to the clutch cable to lubricate the bars end of that item ....and inspect for fraying.
3.  Slightly more effort to remove the top of the brake master cylinder, when doing yearly fluid changing.
4.  The fit is not perfect, particularly where the cover part fits over the master cylinder; a bit of work on the front single screw guard hole helped some.

CAVEATS:
My K-bike is equipped with EZS front forks.  Whilst the upper area LOOKS like it has the very same distances as a stock LT, I am not sure.  So, there is a possibility that there could be interference with the pocket covers.  I very much doubt that there is fairing contact potential.

Photos:   The throttle has one of the Throttle Rest type of devices on it ... I like them, they really reduce my right hand tiredness. 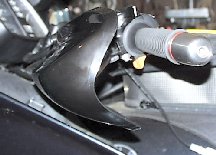 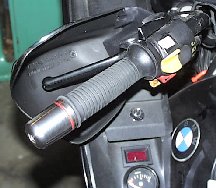 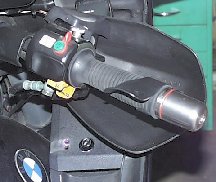